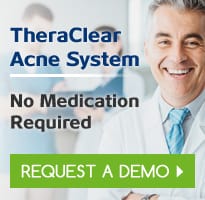 TheraClear’s two-part process utilizes a vacuum and broadband light to clean, treat and remove the blocks to clear skin. Treatments are quick to perform and highly effective.

Deep cleanses the pore by extracting the blocked sebaceous material.

The clear solution to acne – no matter what the cause

Clinical studies have determined that acne has several causes, but at the root is always blocked sebum. TheraClear removes the sebum to let beautiful clear skin shine through.

Acne is a disease of the pilosebaceous unit affecting both teenagers and adults.  It is one of the most common disorders treated  by the medical profession as well as self treatment using over the counter remedies.  It can manifest itself as small comedones, blackheads, whiteheads, papules, pustules and deep cysts. There are numerous treatments available, which can vary from, but not limited too, systemic and topical antibiotics, retinoids, isotretinoin, and benzyl peroxide.  Many of these treatments are effective if used for a sustained period of time.  Most do not show immediate results which is often the goal of most patients. 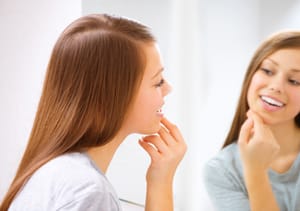 All acne lesions start with the formation of a microcomedone created by hyperproliferation of the follicular epithelium [1].  At this very early stage, inflammatory processes and activation of the vascular endothelium are present.   This initial inflammatory event may have multiple causes, some of which or all of which may be present.  Changes in the concentration of the lipids in sebum may be one factor [2]. Peroxisome proliferator- activated receptor (PPAR) are transnuclear receptors responsible for generating peroxisome, which in turn are responsible for the catabolism of a variety of fats inside the cell. Studies linking androgens with PPAR in sebocytes suggest the increase production of free fatty acids and peroxidative squalene, both inflammatory compounds may be one cause [3].  Other evidence also links androgens linking to PPAR in sebocytes with increase sebocyte differentiation and lipid generation[3].  Free fatty acids in the cytoplasma of sebocytes also bind to PPAR leading to an increase in inflammatory compounds.

Increase in stress is often associated with an acne breakout.  Recent scientific studies have shown that immunoreactive nerve fibers in close proximity to the sebaceous glands generate a neuropeptide called substance P that further stimulates the germative sebocyte cells leading to an increase in the number of these cells and in their differentiation [4].

The anaerobic bacterium pAcne can also be the source of the initial inflammation.  Although studies have shown it is not necessary for pAcne to be present to start a microcomedone, its presence contributes to an inflammatory response [1][5].  In acne lesions, human β defensis-1 and -2 are upregulated and serve as a protective mechanism against pathogens such as bacterias [5].  It is reasonable to assume that pAcne bacteria is responsible for this increase in human β defensis-1 and -2.  In addition Toll-like Receptors (TLR) manifested on macrophages are found in acne lesions.  TLRs identify molecular patterns on bacteria and their presence is an indication that pACne bacteria have precipitated an inflammatory response.

The presence of inflammatory cytokines in the pilosebaceous unit creates hyperkeratinization, an excess of keratin [6].  This excess leads to an increase in the adherence or bonding of dead skin cells together resulting in a blocking of the hair follicle.  A small cap is formed.  The inflammatory cytokines will also cause the epidermal/dermal barrier between the infundibulum and the dermis to be compromised.  Components of sebum will spill out into the dermis increasing inflammation, which is the main cause of scarring.  The accumulation of sebum will also increase the food supply and improve the anaerobic environment for the pAcne bacteria leading to a surge in their population further exacerbating the problem.

Although the cause of the acne lesion is multifactorial, one major factor is an increase in sebum in the infundibulum unit.  Removing the sebum/follicular contents is a sound method for reducing acne.  By removing sebum/follicular contents, the level of pAcne population is immediately reduced.  The various inflammatory cytokines contained in the sebum are extracted.  The inflammatory free fatty acids and peroxidomes are removed.

Although secondary to removing the sebum, the inflammation caused by acne has a major vascular component.  Very small capillaries, produced in response to the inflammatory signaling, proliferate around and below the acne lesions. This increase in vasculature is detected as redness.  Pulsed light of the proper wavelength and temporal duration is an ideal energy source for removing these vessels.

Theraclear and the Causes of Acne:

The discussion above shows that whatever the cause of acne, the cause is in the sebum.  Remove the sebum and the cause comes with it.  Theraclear is the only device that removes the sebum.